The Hindu University of America’s Certificate Program in Bhagavad Gita through Sanskrit provides a four-year intensive program of study that prepares beginning students, i.e., with no prior fluency or knowledge of Sanskrit, to achieve proficiency in Bhagavad Geeta through the Sanskrit (Samskritam) language.  In this program, the faculty will lead the students verse by verse, in sequence through the Bhagavad Geeta, while simultaneously unfolding both the meanings of the verses as well as the nuances of the language. This program aims to enable the students to study the Bhagavad Geeta directly without translation or mediation, and gain proficiency in conversational Sanskrit, i.e., the ability to speak fluently and comprehend easily. At the end of this program, students will be able to access other Shastras in the Sanskrit language with ease on their own.

This program represents a foundation curriculum for students of all ages ranging from High School onwards. It is targeted at beginning students with a passion to learn a new language, as well as those who are keen to engage with the Bhagavad Geeta, in its original language. No prior knowledge of Sanskrit is assumed except for familiarity with the Devanagari script. The medium of teaching will be fully in Sanskrit with some assistance in English to bring students up to speed quickly. Students with some familiarity with the Devanagari Script and any one Indian language (Bharatiya Bhasha), will have an easier access to this Program.

For thousands of years, the Bhagavad Gita has inspired millions of readers. Here’s what some of the greats have to say in praise of this venerable scripture. 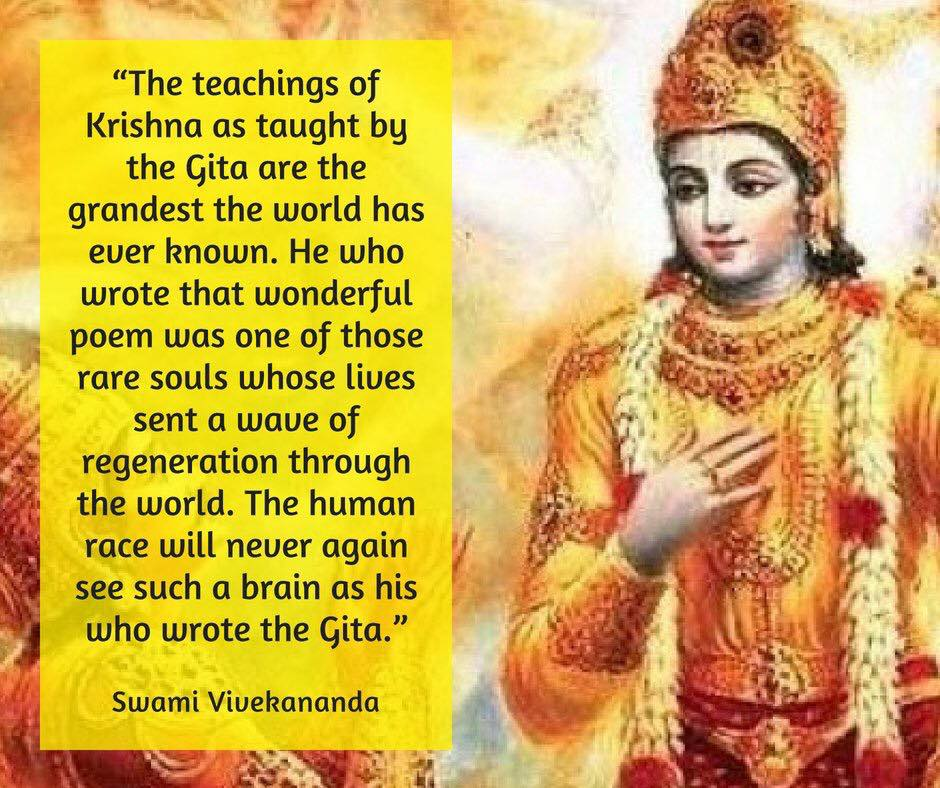 “From a clear knowledge of the Bhagavad-Gita, all the goals of human existence become fulfilled. Bhagavad-Gita is the manifest quintessence of all the teachings of the Vedic scriptures.”

“Throughout the Gita the yoga-sastra is given; telling one the ways and means to be a mature person free from conflicts, fear, hurt, and guilt. Along with the yoga message is the brahma-vidya, knowledge of the reality of yourself being the essence of everything, your being the whole. The Gita has all that is to be learned from the four Vedas, which are a vast literature. Therefore, the Gita has to be studied, and if it is understood well, everything is well understood.”

“The Bhagavad-Gita is a true scripture of the human race, a living creation rather than a book, with a new message for every age and a new meaning for every civilization.”

“The Bhagavad-Gita calls on humanity to dedicate body, mind, and soul to pure duty and not to become mental voluptuaries at the mercy of random desires and undisciplined impulses.”

“When doubts haunt me when disappointments stare me in the face, and I see not one ray of hope on the horizon, I turn to Bhagavad-Gita and find a verse to comfort me; and I immediately begin to smile in the midst of overwhelming sorrow. Those who meditate on the Gita will derive fresh joy and new meanings from it every day.”

“When I read the Bhagavad-Gita and reflect about how God created this universe everything else seems so superfluous.”

“The Bhagavad-Gita has a profound influence on the spirit of mankind by its devotion to God which is manifested by actions.”

“The Bhagavad-Gita is the most systematic statement of spiritual evolution of endowing value to mankind. It is one of the most clear and comprehensive summaries of perennial philosophy ever revealed; hence its enduring value is subject not only to India but to all of humanity.”

“The idea that man is like unto an inverted tree seems to have been current in bygone ages. The link with Vedic conceptions is provided by Plato in his Timaeus in which it states…” behold we are not an earthly but a heavenly plant.”

“In the morning I bathe my intellect in the stupendous and cosmogonal philosophy of the Bhagavad-Gita, in comparison with which our modern world and its literature seems puny and trivial.”

“The marvel of the Bhagavad-Gita is its truly beautiful revelation of life’s wisdom which enables philosophy to blossom into religion.”

“In order to approach a creation as sublime as the Bhagavad-Gita with full understanding, it is necessary to attune our soul to it.”

It is taught by HUA’s dedicated Faculty, using an easy-to-use Online Platform, featuring a hybrid learning model with both live virtual classrooms as well as pre-recorded video material.

In completing this Program, the students will gain proficiency in:

No prior knowledge of Sanskrit is assumed except for familiarity with the Devanagari script. The medium of teaching will be initially English and slowly transition to Sanskrit (with some assistance in English) to bring students up to speed quickly.

The Program of Study is structured in the form of a 16-Quarter (4 Quarters per year) sequence of 16 courses, 1.5-Credit hours each. This will add up to 240 hours of instruction and 480 hours of self-study.

The 16-quarter Program of Study is structured in three successive phases as follows:

Students will have the option of taking the “M.A Sanskrit Proficiency Test” at any time after the 3rd year of study (SAN1034), and advance to:

In any case, students will be participating in a “Higher Education” ecosystem that supports and enables advanced learning in Hindu studies as well as Sanskrit literary studies.

Structured innovatively using the base curriculum and textbooks designed by Samskrita Bharati, the Program will be based on the material contained in the books titled “geetaasopaanam” and “geetaapraveshaH”, augmented with supplemental handouts and other texts. SAN1012 - This course is the second in a 16-course sequence which constitutes the Certificate Program in Bhagavad Geeta through ... Read More

SAN1011 - This course is the 1st in a 16-course sequence which constitutes the Certificate Program in Bhagavad Geeta through ... Read More Certificate Program in Bhagavad Geeta through Sanskrit - Beginner Phase is structured in the form of 4 quarters (1 year) ... Read More SAN1013 - This course is the third in a 16-course sequence which constitutes the Certificate Program in Bhagavad Geeta through ... Read More
View all programs