The Certificate program in Hindu Civilizational Studies (C.H.C.S) is a 12-credit hour program with an in-depth exploration of the Hindu Civilization from a Hindu perspective. It provides the student with a grounded understanding of Hindu Dharma as one of the oldest, continuous, and still thriving cultures of the world. It unfolds the paradigm of Dharma, i.e., sustainability or natural order, through an exploration of its culture and knowledge traditions. This program enables the student to discover, reconnect and become profoundly established in the paradigm of Sanatana Dharma through a systematic study of the Hindu Civilization.

It comprises of 2 parts-

1.Exploring Hinduism – a set of courses to gain an understanding of Sanatana Dharma and Hindu thought – the bedrock of the Hindu Civilization, by exploring the history, facets, and practices of this culture, which is based on the principles of Dharma at its core. What is Sanatana Dharma? What is Hinduism? When did Hinduism start? Who is a Hindu? What makes Hindus different? Does Hindu thought have relevance in today’s world? Answers to such questions can be found in this “Exploring Hinduism” set of courses.

2.Hindu Contributions To The World – a set of courses to learn how the Hindu civilization and its knowledge systems had influenced world progress with contributions in the realm of both Matter and Mind. This series of courses looks beyond the myths set in motion by a few hundred years of colonial encounter and examines the evidence for the sciences, technologies, inventions, industry, prosperity, wealth and thought leadership that had made India a sought-after civilization across times.

It is now accepted knowledge that India was at the top in world trade for around 2000 years with 1/3 rd of world trade coming from India. But there is very little mention of how India accomplished this position. What did it create? What did it trade in? This set of courses goes into the details of the individual components that made up this 33% of world trade and its impact on the world and in India. This subject matter stays unacknowledged and is rarely available for discussion. It also addresses the crucial question, “How could this civilization give all this and more – both to the East and the West?”.

It is a cyclic program of 8 quarters / courses, where participants can join during any quarter and get their Certification once they complete the 8 courses in any order and at their own pace, depending on their ability to join any quarter. This program is open to all – those with or without Indian or Hindu roots, wherever they may be in the world. It will help see the world from a Hindu, Bharatiya, Indic perspective and experience how different it is, from what we think we know.

At the end of this program, students will be able to:

This program is suited for those seeking personal growth in any one or more of the following dimensions.

1) Academics– Students can join this course program in addition to their ongoing academic programs of study, at timings that do not clash with their main academic programs, to obtain an additional certification with international credits.

2) Career– Professionals and individuals can join this as a Continued Education program to grow their careers by finding inspiration, ideas, conviction as well as direction to innovate or contribute to line with Dharma and sustainability.

3) Cultural– Where, youngsters, friends, parents and grandparents can join together or separately, from same location or even across continents to stimulate meaningful discussions about their roots, traditions and culture, within geographically dispersed families too.

How long will this program take?

This program is spread across 8 quarters and hence the minimum duration for this program is 2 calendar years. However, since it is cyclical, students can join during any quarter and complete the courses in a circle.
Program Certificate will be awarded only after all the 8 courses are completed. However, at the end of each course, students will have the option of downloading their respective course completion certificate for that quarter.

Structure of the Program:

This is a total 12 credit hours program.

The program comprises of 2 series of 4 courses each, i.e 8 courses totally across 8 quarters

Each course spans 10 online, live sessions with the faculty for about 100 minutes each. These sessions will typically be held on Weekends at time slots suitable for USA and India – 1 per week spanning 10 weekends or 2 per week spanning 5 weekends.These timings should in most cases be suitable for Europe and UK too. In case of other time zones, batches may be added subject to the number of registrations from there.

In today’s competitive world, where many are equally and well qualified, what is it that can set
someone apart? Is it a sense of purpose? Is it passion for making a difference? Is it SEL skills, i.e., Social and Emotional Learning Skills? These are abilities and attitudes that lie outside core literacies such as reading, writing and arithmetic. They are skills that allow creativity, problem solving and communication with responsible social engagement at their core. However, unlike Core Foundational skills which can be taught, the SEL skills have to be cultivated using methods that can kindle interest, inspire ideas, stimulate thought and develop confidence.
Hindu Civilization is a reservoir of insights and knowledge, with an extraordinary track record of flourishing, survival, and sustenance, across millennia. A study of the Hindu Civilization thus is useful not only for those with Hindu roots but for all, as this Civilization is based on the universal order of Dharma, and its secrets are eternally relevant.
This program has been designed keeping the needs of the 21st century in mind and the relevance of the Hindu thought and the Hindu Civilization for the future of humanity. Getting to know the Hindu Civilization and its Knowledge will not only help in scaling up one’s soft skills for meeting future challenges but will also provide the Clarity, Confidence, Direction and Distinction needed to succeed in that future 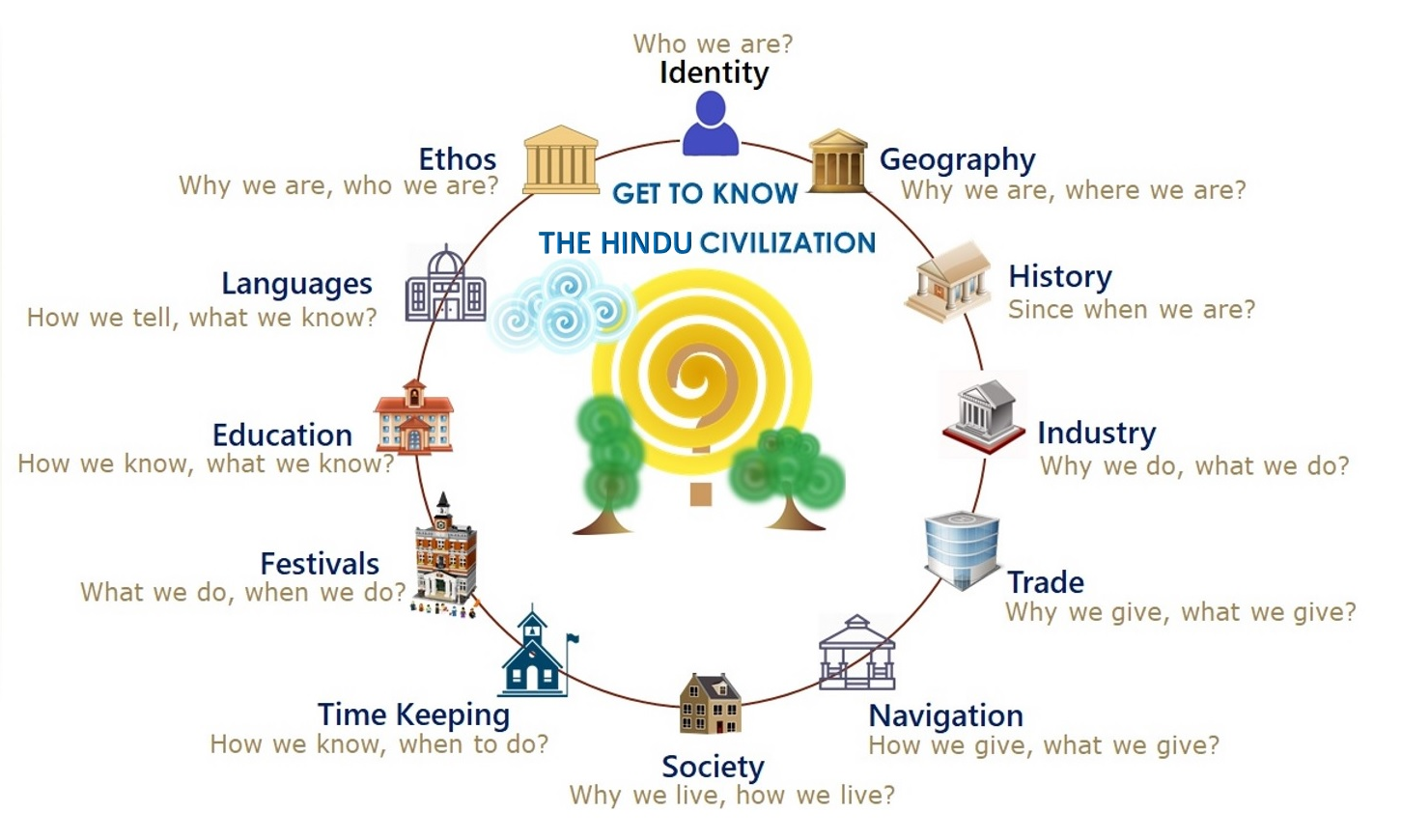